Skip to content
Home > ATD : All Together in Dignity > In Quebec

ATD Fourth World is in Quebec since 1982.  Local groups exist in many regions and a permanent team established in Montreal coordinates their work from the ATD Fourth World’s house.  The team run different projects in under-resourced neighborhoods (Street Libraries, Festival of Learning), as well as projects aimed at encouraging the participation of people living in poverty (Peoples’ Universities, Merging Knowledge Projects), and also public campaigns aimed at influencing public opinion and government policy (Law Committee 112, October 17th International Day for the Eradication of Poverty), as well as ongoing actions in Québec. 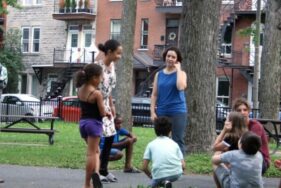 What is a Street Library?!

Street Library: Can you tell me once and for all what it is? I will be honest and say: I (…) END_OF_DOCUMENT_TOKEN_TO_BE_REPLACED 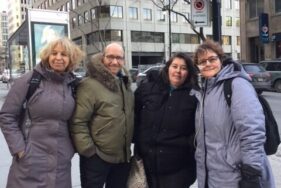 In December, after three months of work and with the support of the International Movement, we presented a memoir entitled: (…) END_OF_DOCUMENT_TOKEN_TO_BE_REPLACED

How can we reduce poverty and extreme poverty in Quebec? Our personal initiatives may seem insignificant when we think of (…) END_OF_DOCUMENT_TOKEN_TO_BE_REPLACED