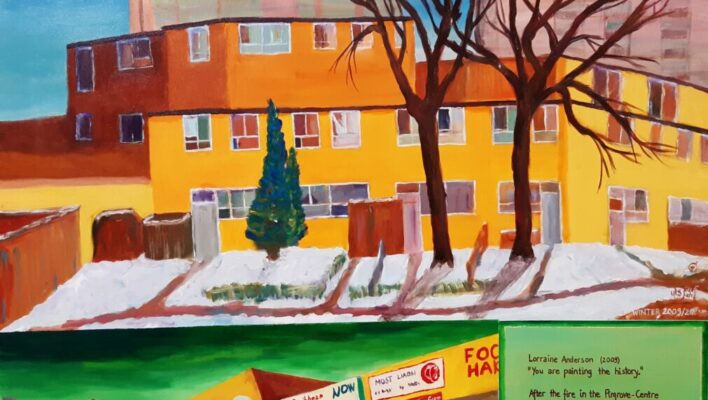 “This is about history,” Lorraine Anderson told Urs Kehl as he hung the paintings he had done in the neighbourhood on a fence at an outdoor exhibition. But on February 21, 2020, a fire broke out  at the Learning and Innovation Community Centre that Lorraine runs in Toronto and the two paintings by the Saint Welshman still on display there burned down. She informed the artist and sent him photos of them. Today, residents of Rorschach helped the artist repaint the two paintings, which are now reunited into one.

Nui, a Thai volunteer with ATD Fourth World, wanted to learn more about Toronto life through a mission in this neighbourhood house. One afternoon a week, she worked with the children while Urs painted on the same streets, summer and winter.

“The painting with the yellow house was done in winter, with the Painting-Box. (A kerosene lamp in the box allows you to paint even in the cold.) And on the other, there is a convenience store run by an Indian. That’s where people meet and shop. ”

Urs continues his story: “In this neighbourhood, I had also exhibited paintings. We had hung large cloths and attached the thin painted wooden plates on top. There was a video workshop nearby for young people. They would come by and ask me questions: “What is your name? Where are you from? Why are you here? Aren’t you afraid of our neighbourhood? “. I was shocked that a 12-year-old already knew that some people avoided this area because they are afraid. I’ve never had any problems there.”

“After the fire, the Community Center director sent pictures of the two paintings to Rorschach. The way they were before. But instead of making two again, I painted them together on one canvas. A new version of the works was needed after the fire.
And in the lower left corner, I painted with a woman helping us in the center. She also wrote the text for the billboards in front of the store. Great work.

It was great that other people, including her, participated. But finding the colors took some time. For one of the boards, I had to work outside several times in the Canadian winter.
When I was in art school in Toronto, I couldn’t get to this area anymore because it was too far away. I didn’t have much time and had work to do for my training.

I went back after almost two years. It was only then that I realized the impact of my paintings. When you paint, you don’t think of the influence it might have on the neighbourhood. I was surprised by people who approached me and still remembered me. My activity meant something to the residents.

Once completed, the painting will be sent to Toronto. In the meantime, Urs has also started to paint for the history of Eastern Switzerland.

Report on the fire by CBC 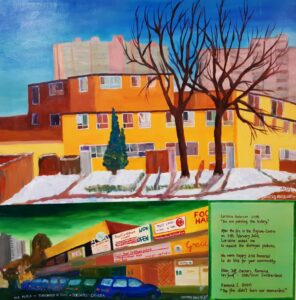 “After the fire, the director of the Community Center sent photos of the two paintings to Rorschach. Just as they were before. But instead of making two again, I painted them together on one canvas. A new version of the works was needed after the fire.”