The campaign “End the misconceptions about poverty” conducted in Quebec in 2013-2014 started from the observation that, despite many advances, misconceptions continue to spread and spread in all walks of life. They are a daily burden on people living in poverty and are a real obstacle for these people.

The campaign has enabled people living in poverty, volunteers and friends of the ATD Fourth World movement to create together simple, clear and effective tools to put an end to these misconceptions about poverty: manual, fact sheets , online quiz, forum theatre, etc.

Here is the le facebook link of the campaign from the time, along with an article analyzing the policies built on these misconceptions.

Check out these tools that are still going strong (all in French): 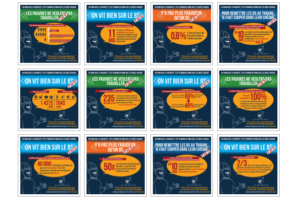 Here are 12 vignettes from our handbook against misconceptions. They are also partly developed here (in French):

Some misconceptions deconstructed in video (in French):