Skip to content
Home > Our actions > Politics and society

ATD Fourth World Movement participated actively in the citizen movement that at the end of the 1990s rallied for a law against poverty in Quebec. This mobilization conducted the National Assembly in 2002 to vote on Bill 112 to fight against poverty and social exclusion.

Today, together with other organizations and members of Collectif pour un Québec sans pauvreté, we are rallying for a better application of this law and for ambitious measures to abolish poverty.

To perpetuate these political actions, there is a political committee within ATD Fourth World (formerly the Law Committee). Its goal is to have space to reflect collectively on current issues that affect, directly or indirectly, the fight against poverty. The members of the committee, many of whom live in poverty, then decide on the means of action to be taken to react to the situation. The Policy Committee meets about 8 times a year.

Thanks to its action, the Movement occasionally speaks to government committees and commissions by filing briefs (see Resources the page). 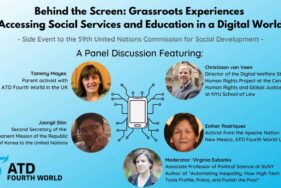 Accessing Social Services and Education in a Digital World

POWERFUL VOICES DISCUSS THE REALITIES OF ACCESSING SOCIAL SERVICES IN A DIGITAL WORLD, AT ATD FOURTH WORLD’s SIDE EVENT DURING (…) END_OF_DOCUMENT_TOKEN_TO_BE_REPLACED 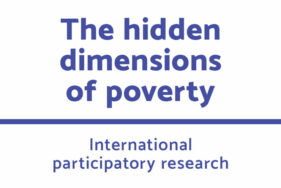 Who Decides How We Define Poverty? 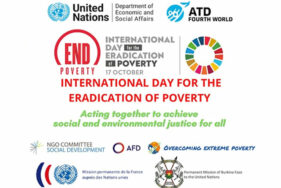 #EndPoverty #StopPoverty #IDEP2020 View our online commemoration:   “Acting together to achieve social and environmental justice for all” People who (…) END_OF_DOCUMENT_TOKEN_TO_BE_REPLACED