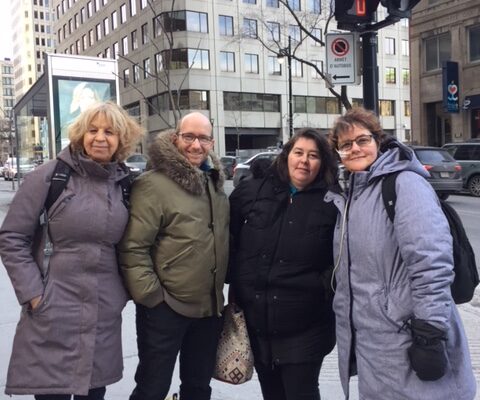 In December, after three months of work and with the support of the International Movement, we presented a memoir entitled: “Successful youth protection with vulnerable families” to the Special Commission on the Rights of the Child.

The strength of our memoir is to share the testimonies of parents concerned by the DYP’s measures – essentially that of judicial placement – and to come up with 10 practical proposals.

As early as the beginning of January, despite a large number of memoirs received by the Commission, we were invited on February 5 for an one-hour hearing.  It was important to us to set up a delegation right away and work together to prepare.

During the hearing, the Commissioners listened and showed a real interest in ATD Fourth World Movement and in our Merging Knowledge approach.

For my part, I am happy to have been able to speak up for “the right of all children to have parents who are respected”, whatever weakness they may deal with.

This adventure has brought us through many emotions, but I have no regrets. The debate around Youth Protection is taken seriously and many interventions are in favour of better support upstream for families.

I hope that the Commission’s report, which is due in November, will include major and innovative improvements to support for the most vulnerable families in our society.